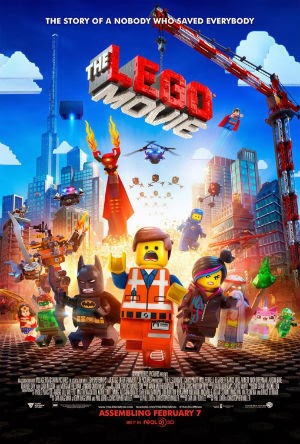 I saw this on opening day (February 6th, 2014 in Malaysia). I'm going to be honest here. I don't think I can give an impartial review of this movie. I love Lego. I've loved them since I was old enough to walk. Maybe even before that. And I continue to love them to this day.

I was expecting a standard by the numbers animated movie employing the standard tropes. I was wrong. They went above and beyond with this. It's not perfect, but it's certainly one of the most enjoyable movies I've seen in a while.

Minor spoilers follow, so if you haven't seen it stop reading now and go see it. I mean, seriously. Go. Right now.

The premise is familiar : An everyday nobody is really the chosen one to save the universe, and he has to make a hero's journey to fulfill his destiny. The execution however, is brilliant. The story has a frantic, almost chaotic energy to it, and near the end we get a Big Reveal that will make you go "Of course! It had to be that all along!". If you go in cynically thinking it's yet another cliched animated movie, you'd be wrong.

I'm going to take a page out of Bureau42.com's reviewing style and break the rest of the review down by aspects of the movie I am judging.

Originality : I don't think anyone's ever done a full length animated Lego movie before. The story starts out following standard tropes and then turns it on its head in a unique way. 5 out of 6.

Effects: This movie is a combination of CG and stop motion, and CG that looks like stop motion. It's a very loving tribute to stop-motion Lego films. That may be lost on the folks that have never seen Lego stop motion films before, but they'll certainly notice the quirky charm to it. They could have easily made this entirely in smooth 3D, but they didn't; it's just one of the many examples of attention to detail in the film. 6 out of 6.

Story: The story is chaotic, yet it makes perfect sense, especially after the Big Reveal. There are a lot of themes buried in the colourful, kinetic action. It's packed to the brim with jokes and more jokes both slapsticky and subtle. 6 out of 6.

Acting : The voice cast was almost pitch-perfect. Chris Pratt, Elizabeth Banks, Morgan Freeman and Will Arnett deliver their characters with earnest charm. Will Arnett pretty much steals the show with his rendition of Batman, which feels like he was taken right out of How It Should Have Ended's superhero cafe. 6 out of 6.

Production : I don't even know where to begin with this. Everything in this movie looks amazing. The attention to detail is staggeringly good. Example: Classic spaceman's helmet has the bottom part broken in exactly the same way they tend to break over time. The references to Lego part names like the "macaroni". Every single effect such as flame or water is rendered in Lego. I'll need multiple viewings just to appreciate it all. 6 out of 6.

Emotional response : I was laughing out loud at the jokes, and the Big Reveal was especially touching. 6 out of 6.

1. It's true because it rhymes!
2. The Lego "builder-vision": the action sequences where the Master Builders just slap together vehicles by a quick scan of the available parts in their surroundings. It's like MacGuyver meets the Matrix meets Robot Chicken.
3. Middle Zealand.
4. Seeing your favourite minifigs on the big screen!
6. Will Arnett's Batman. And his hilarious song.
7. Surprise cameos!
8. The Big Reveal.

The summer releases of this year will have a hard time topping this one.